The latest events in Ukraine really showed us plenty of things, but perhaps most important thesis that stretches from the beginning of demonstration in Kiev, over referendum on Crimea, to the latest developments on the brink of war in Donetsk and Slaviansk the return of a multi-polar world order. Ukraine was accidentally or “intentionally” chosen to be the training ground for modern geopolitical chess game in which we can see the strength, power and influence testing between Russia and the United States. At the beginning of the year in conclusion of the text about  Russian missile diplomacy I mentioned this thesis about return of “multipolarity” and straightening poles on a global scale. As time passed, this thesis become increasingly clear and I think we’re much more in remind of the former Cold War rhetoric.

Return of Russia began with blockade of resolution about Syria intervention, and reached its zenith putting Crimea under its control. I think that in Russian case nothing is over yet, and that this is just the beginning. On the other side, the United States began to act like this long time ago and it is needless to enumerate: Yugoslavia, Iraq, Afghanistan, Libya, Ukraine … Sympthomatic things about these events in Ukraine are the methods used for superiority. These methods of taking and putting under control the administrative buildings were used in Kiev, and the same were later used in  Crimea, as well in the Donetsk. Apparent intentions of pro – russian population that they can fight for their status only with the same methods as we saw in Kiev. Although the official position of Russia that are not involved in the events in Donetsk, it is obvious that they are on the territory of Ukraine represented via their secret services, either Russians and USA. The only who suffer in situation like this is Ukrainian people and their economy.

The last time when circumstances were such geopolitically like this, there has been formed “third block”, ie Non-Aligned Movement in 1961. year. This formula, which were first among equals applied by president of Yugoslavia  Josip Broz Tito, president of Egypt  Gamal Abdel Nasser, President of India Jawaharlal Nehru, president of Indonesia Sukarno and president of Ghana Kwame Nkrumah, proved to be very successful in the circumstances that prevailed at that time. Non-Aligned Movement member states were generally overwhelmingly positioned at the margins of the world impacts and the only affirmation within such alliances could bring their joint action to find collective interest and that their voice become honored by the great powers. Yugoslavia was particularly in a very specific situation of a “big gap” between East and West, either geographically and politically. Opting for one or the other completely, would mean economic collapse and political problems. The only logical solution was to remain non-aligned, or “neutral” in some way, and to get legitimacy and regard by others. President Tito of Yugoslavia as an good expert of his chances and “diplomatic fox” performed this maneuver with surgical precision and in the best possible manner in the interest of Yugoslavia. 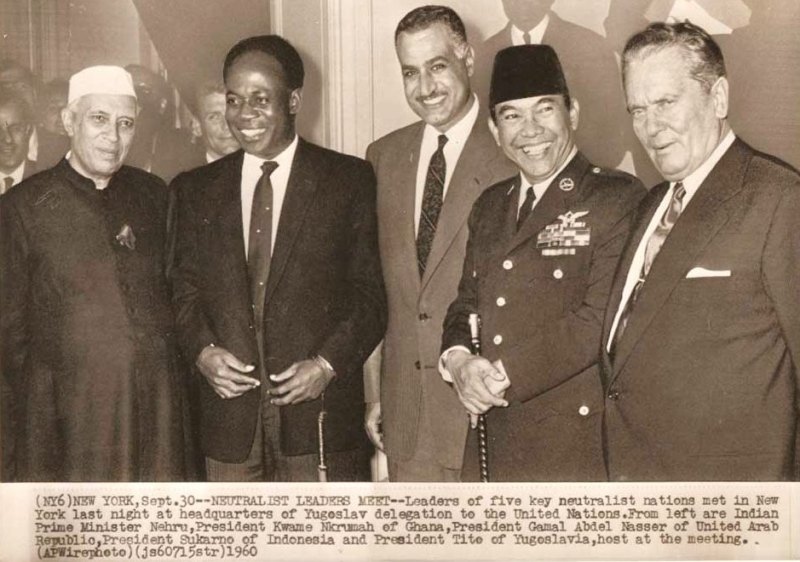 You don´t need not be so smart to conclude how successful diplomatic formula should be applied to identical political and global circumstances nowadays. I say this primarily referring to today’s awkward diplomatic position of Serbia and even worse position of Bosnia and Herzegovina, which since its establishment in this form there is no consistent diplomacy or foreign policy as a consequence of its internal political relations. To put it mildly, situation in this area is chaotic and could be described as good joke.For Serbia we know that country is officially in the process of accession negotiations with the EU, as well with small steps towards NATO membership. These small steps are reflected especially in the sending of an officer of the Army of Serbia at the headquarter office at NATO Joint Force Command in Naples, as well as few official meetings of officials of NATO and the Serbian Army. This is supported also by the dispatch from Wikileaks, originally sent from the U.S. Embassy in Belgrade to hands of Hillary Clinton. In this dispatch Jovan Ratkovic said that as a former Minister of Defense, President Tadic knows the issue well. Tadic believes that Serbia cannot remain outside of NATO forever, but doesn’t say this often because of the political sensitivity of the issue. Ratkovic explained that after the fall of the Berlin Wall, the citizens of Yugoslavia assumed that they would be among the first to enter both the European Union and NATO. It wasn’t until the wars of the Milosevic era and the 1999 NATO intervention that anti-NATO sentiment developed in Serbia. Ratkovic characterized current public support for Partnership for Peace participation and NATO membership as “surprisingly high” given Serbia’s history.” However, a little further eastern Serbia parallel builds strong ties with Russia, which the most visible evidence is the route of South Stream. In these circumstances, when it comes to complicating of situation in Ukraine and when UN General Assembly vote on the resolution which annexed the Crimea to Russia, inevitably comes up pressure on Serbia and Bosnia and Herzegovina, where both states generally were abstain from the voting.

Bosnia & Herzegovina and Serbia were the only abstain countries in the Balkans, which in general means that you are not declared. All other countries in the Balkans and from former Yugoslavia voted for this resolution. With this “garbled” move Serbia wanted to preserve good relations with the “booth sides” but after a while we can certainly expect this to bring new problems for Government because EU did not expect that, and in these circumstances, “to be abstain” means having position that not coincide with the same position within the EU. In Bosnia & Herzegovina abstain is almost standard story because three members of the Presidency who is in charge of foreign policy in general, could not agree on voting. Because of all the above mentioned, and primarily because of the “neo – multipolarity” and the complexity of the position in which are Serbia and Bosnia and Herzegovina, I am very confident that both countries should clearly and diplomatically bring focus to change the status of observer and gain full membership status in the Non-Aligned Movement. Already in advance within the EU, on the possibility of these idea they did not take it too kindly and even emphasize that Serbia is no longer “non-aligned” and have to decide, although the EU itself is in the same position as the former Yugoslavia once. The attitude of the United States passed by the current Ambassador to Belgrade Michael Kirby showed us other side when he said :

Except remark that Serbia is treated as successors of the former Yugoslavia, full membership in Non – Aligned would have greater maneuver space for Serbian nowadays situation. Deeper engagement and mobility in Non – Aligned movement could regain some old traditional friendship and improve economical situation, especially in the countries of growing African economies. On the other hand there would be possible to make ​​legitimate retreat towards NATO and also to confirm neutrality of Serbia declared by its National Assembly in Constitution. Besides this enhanced and a full engagement of Serbia would bring new energy to the Non-Aligned Movement and give more on the scale of importance. This would be also a great opportunity for Bosnia and Herzegovina to include itself seriously in international circles and to become more influent in the outer policy. With its comparative advantages Bosnia & Herzegovina could to accomplish primarily some economic benefits as well as Serbia, and moreover could be placed as partner with stance equally towards all, without any repercussions because all countries are aware of its constitution and complexity. Except this, Bosnia and Herzegovina should be completely demilitarized in the future, but this is not the subject of this analysis. My opinion is that with very quick turnaround to the Non-Aligned Movement, the position of Serbia would be much better, especially at the principles of greater development of economic diplomacy, without major political stories, and the situation at the global level itself brings us to this possible solution. This would also help to some stabilization in the Balkans relations between these two countries, as well as within Bosnia & Herzegovina itself, where there would not be different pressures and ugly methods tore down the position of the Republic of Srpska which guaranteed by the Dayton agreement and the focus should be shifted from political and constitutional questions to and only to economic development. When all is summed up, it seems that an indirect hint from Ambassador Kirby in general does not seem so bad, and how we are going to do, time will tell us in the future.

This site uses Akismet to reduce spam. Learn how your comment data is processed.