This violence that we can watch these days on the streets of Kiev is far more than ordinary expression of popular anger against a government. Instead of that I think that this is actually the latest example of most insidious form of fascism rebirth that Europe has seen since the fall of the Third Reich. I will present you here few organisations that fought there for better Ukraine with EU values against regime of Victor  Yanukovych. Maybe his governance was not so good and beside this protest social situation in Ukraine could be better, but can you imagine what would happen in USA if there were scenes like this from Kiev ?

One of the first organisations that took part in ruining and burning of Kiev is called “Right Sector” The organisation believes the current situation is an opportunity “to destroy the state skeleton” and start building a new state, although activists said they do not support the idea of joining the EU, which they consider to be an “oppressor of European nations”. Their founder is  Stephen Bandera. People from western  part of Ukraine consider him as hero, while people from eastern part of Ukraine and Russia consider him as extreme nationalist, terrorist and quisling. Former president of Ukraine Viktor Yushchenko awarded to Bandera the title of Hero of Ukraine in January 2010., but that title was officially annulled by president Victor  Yanukovych in 2011. This is their old logo, a Wolfsangel rune, a common symbol for European neo-Nazi organizations.

Next organisation from these demonstrations that remind us on fascistic period is “Svoboda“, the Ukraine’s ultra-nationalist party that capture 10% of the votes at the last elections and entering the legislature for the first time. Their base of support is mainly in the country’s west, while voters in the east and south view them as extremists. The leader of the Svoboda, Oleh Tyahnybok, regularly appears alongside Vitali Klitschko as one of the key protest participants. Svoboda party gain membership as observer at the Alliance of European National Movements, along with France’s National Front, the British National Party.

Except this Vice Chairman of the “Svoboda” Pankevych Oleh Ihorovych last year took part with his speech at funeral of Ukrainians who fought for Nazi SS soldiers during WWII. You can watch this from 0:32 on video below.

Another organisation that was represented as opposition is Ukrainian Democratic Alliance for Reforms (Udar) led by the former world heavyweight boxing champion Vitali Klitschko. As we know from the history of demonstrations (UDAR or PUNCH) symbol is “Raised fist” formerly used in Yougoslavia, Libya, Egypt, Syria, these days in Ukraine, Bosnia & Herzegovina and Venezuela. This party also have strong link with EU because they got observer status at European People’s Party. The party won 40 seats in the Ukrainian parliament. At photos below we can see Klitschko at visit to the NATO HQ. On the second photo he is with mentioned senator McCain.

Protesters from Kiev also made their link with Syrian rebels today. They put Syrian rebel flag beside their national Ukraine flag at the main square in Kiev. Most of us are aware of USA perfidious games around Syria, especially about chemical attack for which they accused Assad forces, and  actually that attack was rebel inside job. Fortunately, Russia has seen through this game and stopped the NATO intervention in Syria. So what we can conclude after we saw Syrian rebel and terrorist flag at Kiev main square ? 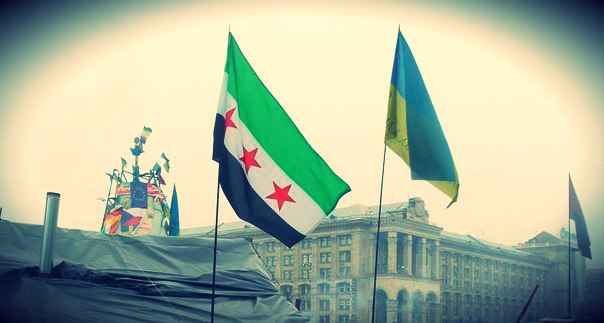 All what happening these days in Ukraine is actually very simple geostrategical game of special war, very well organised by western intelligence. Goal of special war is to use citizens of home country in this case Ukraine, as their warriors.  USA and NATO lost their chance for false intervention and conquering of Syria but they have managed very fast how to repress Russia. Ukraine was wisely selected for that purpose, because of complex religious situation and invisible division on eastern and western part (blue & orange).  Their goal is to make Russia weaker on geopolitical chessboard. On that board few months ago we had game of “shield & missiles” arround Kaliningrad where Russia showed strength of their missile diplomacy on stage. Of course social situation in Ukraine is not on satisfactory level, but those who organized protests dont care for that, because their purpose and final goal is not to help Ukraine to overcome their social and economic problems. As conclusion to this text I will say that I have few excellent Ukrainian friends and especially for them and all other Ukrainians…  let there firstly be peace.

One thought on “Ukraine Neo – fascism in service of “western” geostrategy”

This site uses Akismet to reduce spam. Learn how your comment data is processed.